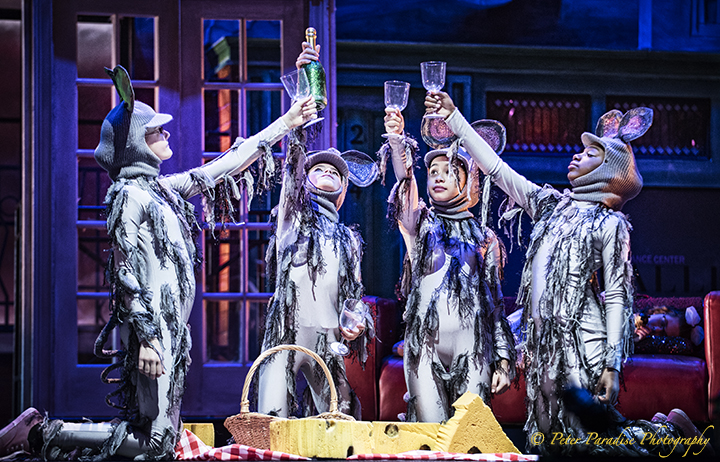 In the tradition of our House Mouse Blog, we’ve invited one of our “rat dancers” to talk about what it’s like to perform on stage.  Ella Moye-Gibbons has danced in the Urban Nutcracker for many years.  She gives her account of her time rehearsing and dancing below.

There’s something specifically thrilling about performing.

First you’re backstage, in the wings. Hands shaking, mind spinning, and feet tapping perfectly in time to the music. You’re whispering to yourself over-and-over again just how the choreography goes, maybe every now and then paying mind to the people around you. It feels terrifying and stomach flipping because as soon as the first clap of hands, or scream of the crowd hits your ears you know that you’re about to put everything that you are up on the line. You’re about to go and prove yourself to way too many people that are all expecting you to be something. They’re expecting something amazing and outstanding and you are barely sure that you can give it to them. Then, just as easily you hear those noises that tell you that someone’s left the stage, or you hear that specific music cue that tells you when your entrance should be. You’re running, crawling, or leaping onto the marley with this almost reluctance to meet the eye of someone in the crowd.

But then you’re out on the stage with a fake smile plastered on your face trying to ignore that one annoying thing about your outfit when you realize – you finally realize – that it’s not so bad after all.

So then you start being confident, and you start to have fun with your time in front of others. The stage turns into a personal arena for you to prove yourself better than those around you, to push yourself harder and stretch your smile wider than you ever have before. Every tiny move of the arm to weight shift, to turn, or to leap is filled with this screaming passion, hoping that someone, anyone, will think more of you than who you yourself know you are. Because without this moment of pretend, this moment of competition and differentiation, you undoubtedly feel forgotten within the seams of something you yourself are helping to sew together.

You don’t want to be left behind in this open space that tries to hide you behind others who are supposedly better than you. You want to prove yourself because you’ve gone through so much to get here and no matter how many times you joke that you’re still failing you don’t believe it at all. You know that you’re worth so much more, yet you think of yourself as so much less, because deep in your heart you let those words and opinions, that barrage you day after day, get to you. All of the corrections, and yells, and looking at yourself in a mirror while pushing yourself to be better, begets that you’re always told exactly what’s not good enough. You take criticism-after-criticism because that’s the culture that you’ve grown to be a part of, and it’s the only way that you know how to continue forward in this society of people trying to climb an unreachable top of an unimaginably tall ladder.

On the stage, it’s beautifully over-easy to throw away all of the opinions of your instructors. It’s a chance to prove yourself in a way that you feel like you can’t in a studio. The audience doesn’t know who you are, or what you’re doing later today, or what you did last week. They don’t see anyone else but a face in a costume. You have this beautiful, shining chance to prove yourself and throw away everything that’s around you. To leave behind all of the thoughts that could be creeping their way through the floorboards of your mind. You’re being handed the scissors that will cut away all of the imaginary strings connecting you back to reality. Even if those strings will grow back once it’s all over. Even if nobody will remember you by the end of it.

It’s the same feeling you get from pressing pencil to paper, tilting your head the same way, or making the same expression that’s in your drawing. It’s the same feeling as hearing the most perfect string of notes come together to form a harmonic melody. The same feeling as a stand out sentence of beautifully strung words on a piece of paper. It’s that feeling that makes you yearn to out-prove; to forget what’s right or what’s wrong, to leave behind all of the space that’s outside of your own creative reach. It fills up your heart and makes you feel full again, taking up a part of your life that you never knew you needed. It’s the feeling that makes you read all night, or doodle in class, or daydream through a conversation. It’s this instinct that tells you to enjoy what’s right in front of you. To abandon the future for just a moment to enjoy the present and what it has to offer you.

Without these outlets to let our emotions out, they would get all bottled up inside and collapse on each other; creating a mess that would seem impossible to clean up. Through this we don’t need a final score that tells us just how well we did compared to some average. Because nothing can replace the feeling I get from smiling until my cheeks hurt. Nothing can replace the satisfaction of a beautiful, overflowing melody. Nothing can replace the sweeping lines of a character dynamically jumping through the air. I don’t need to see my face or my name, I can just as easily create a scenario where a character much braver, fiercer, and more unique than myself can express those thoughts and emotions.

I can forget the world — I can cut those ties — for awhile. And this short while is all I need to feel secure again, without fear of collapsing anymore.